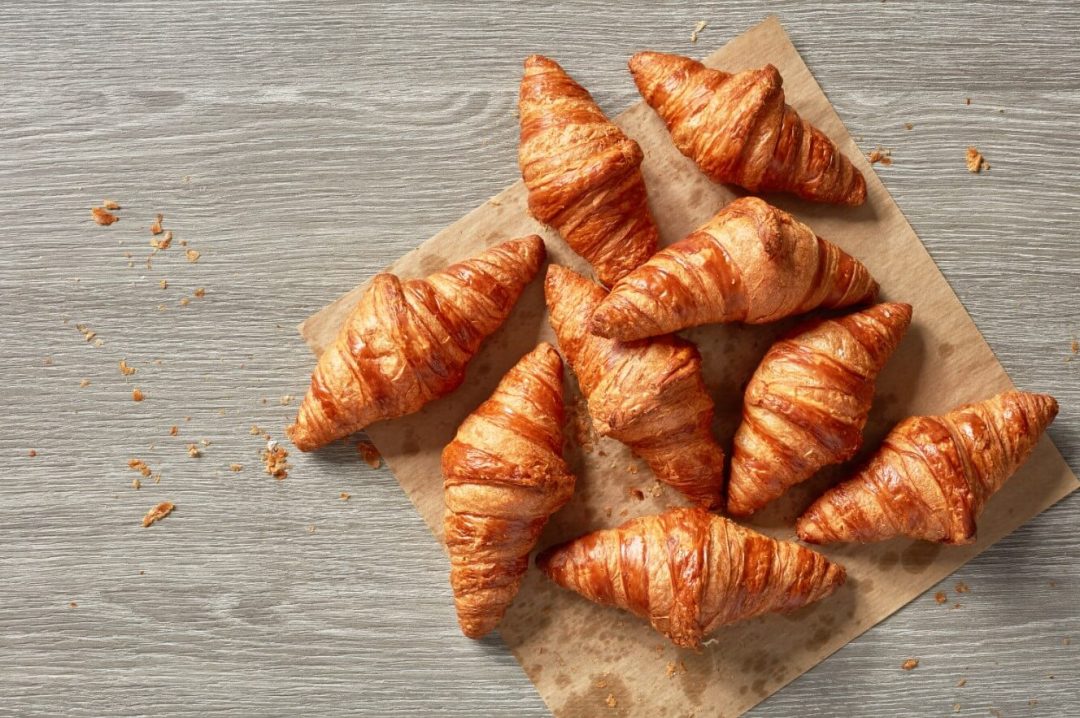 Textured butter: a must for Viennoiseries French pastries

Butter making dates back to Antiquity, but became a food for daily consumption in much more recent times. It was not until the Middle Ages that its consumption, notably in Europe, became more common. Among the more important recipes that incorporate this ingredient is the all-butter croissant that is so well-known today, which dates back to the 19th century… The process of making butter remained empirical until the 19th century, which saw the mechanization of churns and, importantly, the invention of the centrifugal cream separator in 1879 by Gustaf de Laval. From then on, production became more efficient and could be carried out on a larger scale. From the 1960s onwards, industrial butter production took on global proportions.

Butter making today is governed by strict rules, which are defined in the CODEX Alimentarius:

Butter is a fatty product derived exclusively from milk and/or products obtained from milk, principally in the form of an emulsion of the type water-in-oil.

The criteria that dictate its composition are as follows:

Butter is obtained from cow’s milk, which contains approximately 4g of fat per liter, through a combination of two essential processes: the concentration of the fats, followed by churning. When it arrives at the dairy, milk collected from the farms is first of all skimmed. The cream obtained from this process is then super-concentrated to increase the fat concentration to 40g per liter. This concentrated cream is churned in order to transform the fat. In milk, the fat is naturally dispersed and stabilized in the form of tiny microscopic droplets. The churning process disrupts this natural emulsion to enable the separation of the fatty phase. When the fat globules are sufficiently concentrated, mechanical agitation brings about the destabilization that breaks the envelope surrounding the fat globules. In this way, the fatty phase is separated from the aqueous phase (buttermilk), then part of the buttermilk is removed and a new mixture constituted containing 18% buttermilk dispersed in 82% fat.

While the fat content of butter is completely standardized in the manufacturing process, the composition of the fat content can, on the other hand, vary. The feedstuffs given to cows, primarily, and to a lesser extent their breed and lactation stage, are factors that cause variations in the fatty acid profile of the milk. The nature of the fatty acids in the milkfat influences the texture of the butter. The more saturated fatty acids a butter contains, the firmer it will be. By the same logic, the more unsaturated fatty acids a butter contains, the less firm it will be. This is why there are differences in the texture of winter butters (which are harder) and summer butters (which are softer). In winter, the ration of dairy cows mainly consists of silage, with limited pasture grazing. This type of feeding enriches the milk with saturated fatty acids, which means the butters produced from it will have a harder texture.

Recipes for puff pastries vary from one artisan to another and one manufacturer to another. The butter content varies from 20 % to 35% in recipes for the puff pastries used to make croissants, pains au chocolat and pains aux raisins. Butter is thus a key ingredient. It gives Viennoiserie pastries flavor as well as creating the structure specific to all puff pastries.

Butter is thus a key ingredient. It gives Viennoiserie pastries flavor as well as creating the structure specific to all puff pastries. 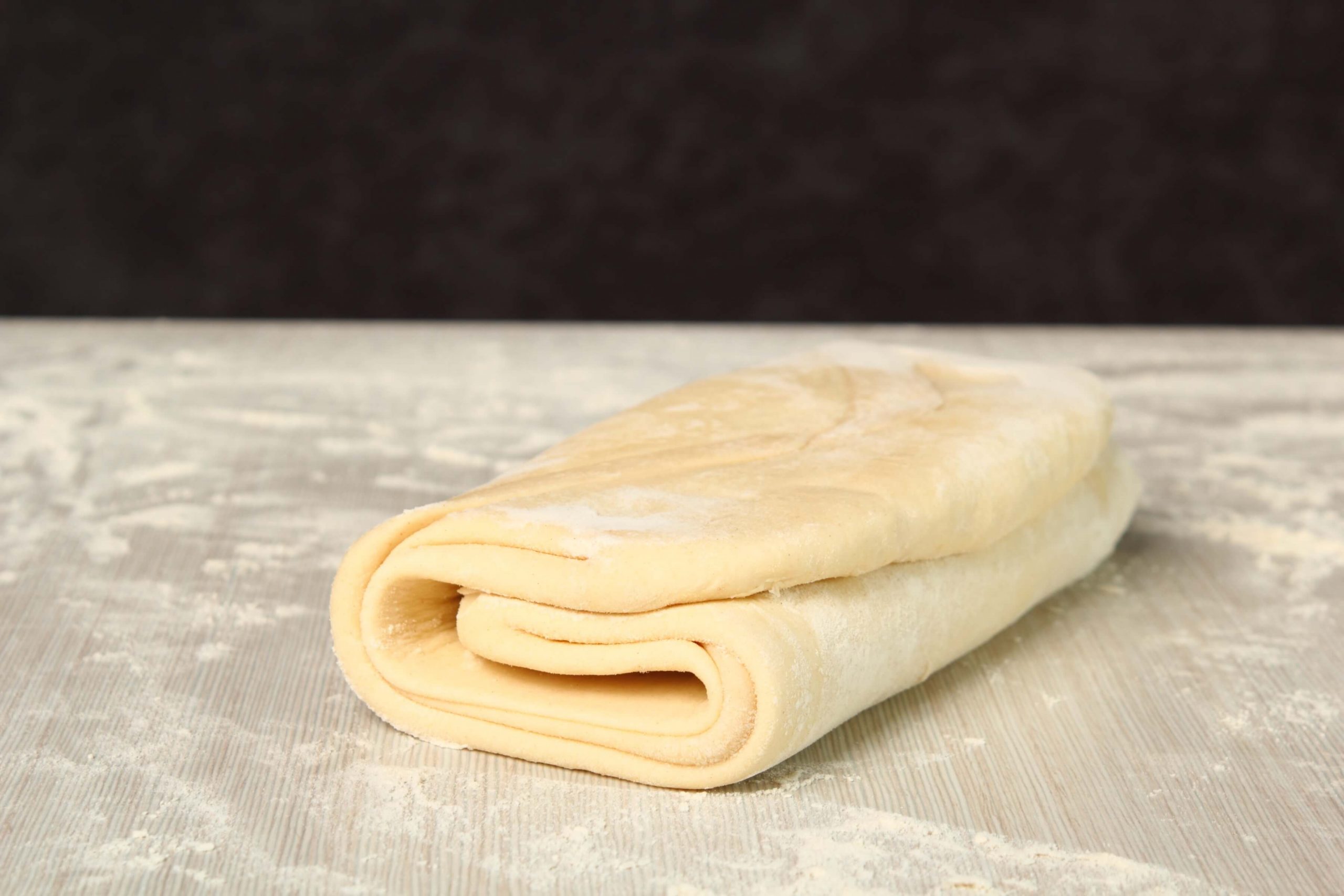 Puff pastries are made with a basic dough of flour and water that is folded into layers, with the butter remaining between the layers of dough and thus separating them. The butter is first laminated (in artisanal production) or extruded (in industrial manufacture) to form a thin slab or band that is placed onto the dough. This base structure is then folded several times (in the pinning and folding stage) and laminated, reducing the thickness to a few millimeters. To ensure that the product will have a puffy, airy and well-expanded structure once baked, it is crucial for the butter to remain in continuous, homogenous layers, and not merge with the dough. These layers of butter act as a barrier against the dispersal of gases during rising and baking. The gas pockets that form between the layers of butter are what allow the structure to expand, and give it its sought-after airy appearance. If the butter melts into the actual dough, the pastry will not expand in the same way and the result will more closely resemble brioche. For a puff pastry to be successful, it is important to use a butter with the right technical characteristics:

Manufacturers of puff pastries can use winter butters, which are suitably hard and help the pastry rise. However, classic winter butters can be prone to a weakness, which is aqueous phase exudation during extrusion, a process that creates significant mechanical strain. They also fall short of optimal plasticity, and can thus cause puff pastries to shrink. Textured butters offer significant improvements with regard to both these factors.

Textured butter brings a technical solution to the problems encountered in puff pastry making: it facilitates the preparation of puff pastries, improves the expansion of the layers during baking, and enhances the taste sensation that the presence of fat brings to the final product.

It is the way in which textured butters are produced that brings about these improvements of the technical characteristics. The desired result is achieved simply by playing with the crystallization of triglycerides and the distribution of the aqueous phase in the crystallized butter, without in any way altering the composition of the butter. The concentrated cream is churned in the traditional way, following which the butter undergoes a very specific process. It is first melted at moderate temperature in order to preserve its flavor, before being subjected to a very precise cooling process. This cooling is carried out in several stages in scraped surface heat exchangers. At each stage, the cooling temperature and the mechanical actions of mixing and shearing are carefully controlled. These combined actions generate fat crystals, control the size of those crystals and distribute them homogeneously through the mass of butter.

This procedure also allows the even distribution of the aqueous phase through the butter. At the end of this process, the butter already has a hardened texture, meaning it can be molded into blocks that can be wrapped in simple film, without the need for cardboard. This is another advantage of textured butters: they do not need the cardboard packaging that is indispensable for the packaging of normal “butter cubes”. A few days of cold room storage completes the crystallization process and allows the blocks of textured butter to take on their final hardness.

The benefits of textured butter: 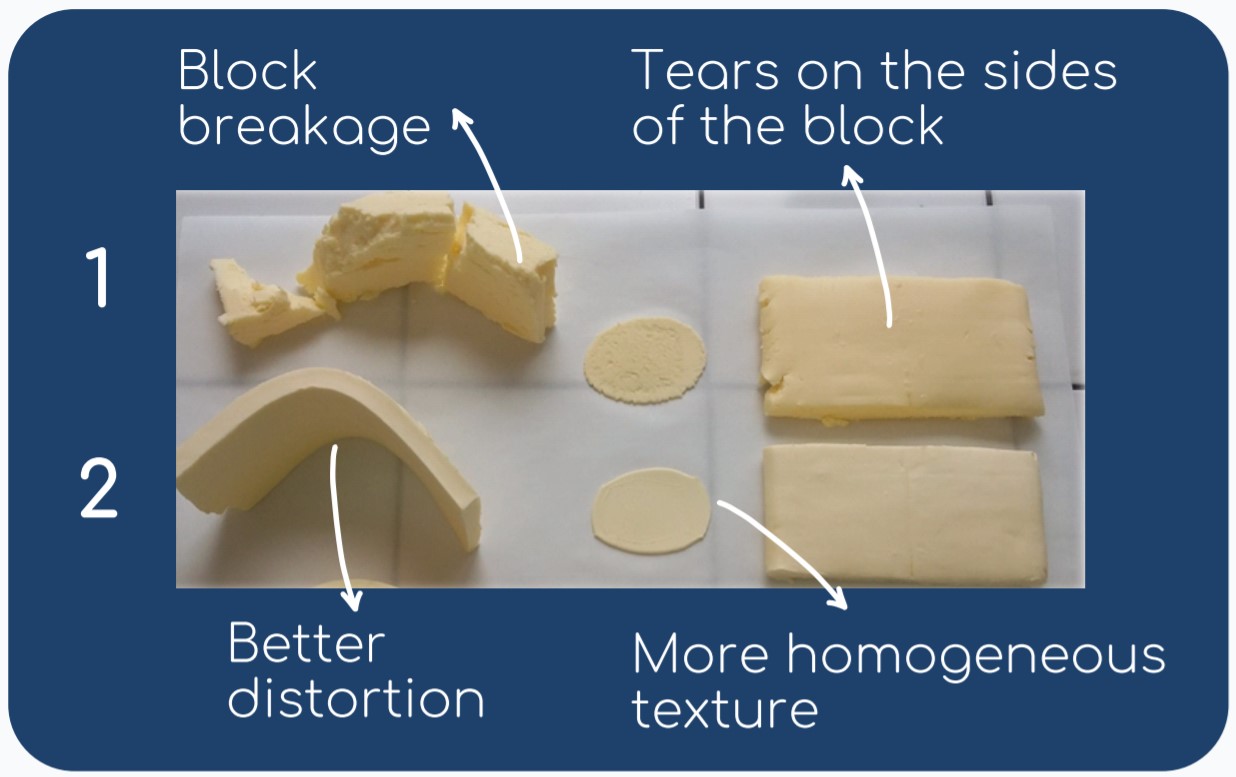 Textured butter can be produced all year round. During the texturization process, the production parameters can be adjusted in order to modify the level of hardness. By analyzing the composition of the fats in the cream, it is possible to regulate the temperature and mechanical parameters of the texturization process to give the desired hardness to the butter. In this way, differences in texture between winter butters and summer butters can be limited, and the ideal plasticity and stability characteristics of the aqueous phase achieved at any time of year.

Users of textured butter quickly discover the advantages of this butter, which has been specifically designed for Viennoiserie pastries:

For more information about Lactalis Ingredients butters, please visit our page or contact our experts.

Mickaël Le Denmat is a Food Engineer working at Lactalis Ingredients. He brings his expertise to his customers by creating their recipes and optimizing their existing products. After a PhD in Food Science, he has hold several product development positions in the retail dairy products sector, and moved to the ingredients sector. It allowed him to build a dual expertise in the production of ingredients and in the implementation of these ingredients in the customers’ recipes.